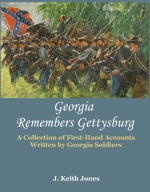 During the Gettysburg Campaign, troops from Georgia formed a sizable portion of General Robert E. Lee’s famed Army of Northern Virginia. From the first crossing of the Potomac River to the bravery and sacrifice exhibited in heavy fighting on July 1 and 2, and ultimately through the agonizing retreat back to Virginia, Georgians played a key role at every stage of the campaign. This collection of accounts written during and after the war by Georgia soldiers provides a unique view into the Gettysburg Campaign from the perspective of those who were in the ranks over the course of those momentous days in the Summer of 1863.